The Wadhurst Dramatic Club’s AGM will take place on the 10th February at 7:30pm in the Commemoration hall. If you wish to continue to see local people, young and old, expanding their horizons while entertaining others on stage in Wadhurst then please try to attend the AGM.

‘Come with me, and you’ll see, there’s a world of pure imagination’.

WDC and WYTKidz are well into rehearsals for this well-loved Roald Dahl musical in January 2020, directed by Amanda Dann whose production of Private Peaceful last November received a NODA award.

Performances are at the end of Jan 2020. Want to get involved, backstage, front of house, making props or something else? Then, contact Amanda on 01580 200948 or email info@dramatiks.co.uk.

Set in 1960’s London, Eric and Iris Dobbins run a friendly neighbourhood pub (The Last Drop) with a regular ‘Free & Easy’ evening (an ‘Open Mic’ Night). Everybody knows everybody – it’s a real family pub, somewhere to feel safe and comfortable. This peaceful existence is threatened by a visit from Ron Stone, the brewery’s new consultant who presents them with a 5-year business plan and revised tenancy agreement. Seeing the ‘marketing potential’ of The Last Drop, Stone has persuaded the brewery to demand £25,000 for a new agreement. Failure to pay means eviction – and will allow the consultants to transform the pub into an ‘entertainment centre’ for pole-dancing and other salacious events. Eric, Iris and daughter Tracy are distraught, barmaids Vanessa and Sharon are devastated, and the regulars are disconcerted. How can this be stopped? Ah! You need to wait until October 2019.

Free & Easy will be performed by our Lamberhurst-based friends, ‘The Very Merry Roosters’, by special invitation from Wadhurst Dramatic Club.  With over fifteen songs from the 50s and 60s performed live on stage, there’s a guarantee you won’t be disappointed.  If you’d like to get involved on-stage or off-stage, there will be some room for Wadhurst actors/ singers & dancers too.

Want to get involved? Contact the director Russ Kirton on tvmroosters@gmail.com. Get your 60’s gear ready and your dancing shoes warmed up – come and join us!

Directed by Russ Kirton, this was a very funny play by Ian Hislop and Nick Newman. And now we have achieved a glowing NODA (National Operatic and Dramatic Association) review.

Join us at our Annual General Meeting when we discuss ideas for the future – we’d welcome your input.

Without a new Commemoration Hall on the horizon, we need to look at how we can improve and enhance the performance, rehearsal and storage space that we have – so anyone with ideas is very welcome to come along.  In this past year, we’ve invested in new sound, light and stage equipment, so we have a very real contribution to make.
We are a very inclusive drama club, we don’t have members, so all supporters are welcome at all our events.  We are looking at restructuring the committee to try and broaden the contribution while reducing the individual workload, so there is plenty of opportunity for involvement without too much commitment.  If you’d be prepared to our friendly committee, just click reply to this email. we’d love to hear from you. And of course there’ll be nibbles and drinks to toast the success of ‘Allo ‘Allo, W.O.T.T., Private Peaceful and Bah Humbug! and to welcome in the next dramatic year!

It may not be a Panto, but it is just as much fun for all the family… and it’s a story not just for Christmas.  A reminder, perhaps, to be more forgiving and generous in the year of Brexit.

Once again brilliantly directed by Kay Sasada, it features toe-tapping songs from the pen of Bill Francoeur, who you may recall from “Flapper!” and the hilarious “Way out West in a Dress“. 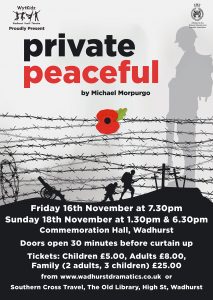 If you missed the show, here is a YouTube summary.. Allo Allo the Slide show

At the end of November we had a good ol’ catch up and not only reviewed 2017 but looked forward to 2018 and beyond. We celebrated our two Accolades of Excellence awarded by NODA South East Region for WYTKidz’ Grease and WDC’s Way Out West In A Dress. John Bush, our president, presented the NODA certificates to the respective directors, Amanda Dann and Kay Sasada. They will hang on our new picture rail in the Orchard Room.
The elected committee are John Bush (President), Jan Lynam (Chair), Marianne Johnson (Treasurer), Catherine Whitehead (Vice Chair), Jill Haskell (Minutes Secretary), Dot Smytherman, Amanda Dann, Anneka Bones, Merlin Beedell, Russ Kirton, James Edwards, Paul Desrosiers and Penny Bones. 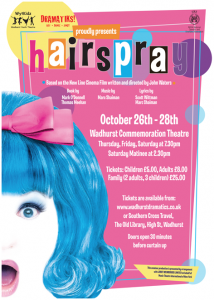 The Noda review is now in! Photos and NODA Report

A vibrant and talented young cast will be taking to the Commemoration Hall stage at the end of October to bring you the scintillating and funny 60s musical, ‘Hairspray’.

In 1962 Baltimore, Maryland, plump teenager Tracy Turnblad’s dream is to dance on The Corny Collins Show, a local TV dance programme. When Tracy wins a role on the show, she becomes a celebrity overnight, and meets a colourful array of characters, leading to social change as she campaigns for the show’s integration.
In 2003 the show won eight Tony Awards, including one for Best Musical, out of 13 nominations. It ran for 2,642 performances, and closed on January 4, 2009. Hairspray was adapted in 2007 as a musical film and also had a London West End production nominated for a record-setting eleven Laurence Olivier Awards, winning four including Best New Musical.

Tickets: £8 for adults, £5 for under 18s, £25 family ticket (2 adults & up to 3 children) – available from the beginning of October on TicketSource or from Southern Cross Travel on Wadhurst High St (right next to the Commem).
Special rates for groups of 10 or more – please contact Catherine c.m.whitehead@btinternet.com or on 01892 783384.
Performances start at 7.30pm on Thursday 26th, Friday 27th and Saturday 28th with a matinee at 2.30pm on Saturday 28th October.  Doors and bar open half an hour before curtain up.

We’ll have you dancing in the aisles, you’ll come away singing and wowed by the young talent we have in Wadhurst!